In this article, we will talk about Delays in Computer Networks and Communication with formulas and examples. First, explain what is a computer network delay. A delay in computer networking is the time taken for a packet to go from its sender to its receiver. You might know that the packet starts from a source, passes through some routers, and then reaches its destination. When it passes from one node (Host or Router) to another node (Host or Router), it experiences different delays on its path at each node. Some of the important delays experienced are transmission, propagation, queuing, and processing delay. Let’s explain in detail each of these delay types. 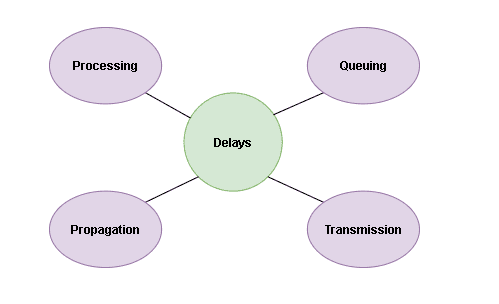 Find the transmission delay if the bandwidth is 10 Mbps and the number of bytes in the packet is 3000.

Find the propagation delay if a packet is sent through an optical fiber and the distance between source and destination is 5000 km.

When a packet reaches its destination, it may not get processed by the processor directly. It will have to wait in a queue (buffer) if other packets are present at the destination and waiting to get transmitted. The amount of time a packet stays in a buffer to get processed is known as the Queuing Delay. Moreover, it varies from packet to packet. Therefore, there is not a specific formula to find it. It depends upon various factors. For example, if packets’ average arrival rate at the queue increases, then queuing delay will also be large. It also depends upon the packet’s length and the transmission rate.

It is the time required by the processor to process a packet. It includes the time spent to inspect the packet’s header, where to send it, and check the bit-level errors, etc. Processing Delay also does not have a formula since it depends upon the processor’s speed, which differs from system to system.

The sum of all delays (Transmission, Propagation, Queuing, and Processing) is known as the Nodal Delay and is given as: