After learning the fundamental concepts of prop and state, the next thing to learn is how data is handled in React. Data can be a user’s detail, list of products, and so on. It is everywhere and inevitable.

A good application always organizes and properly uses the data(state and props). We will learn how data flows in react, correct props and state usage, and explore many useful techniques to work with data. 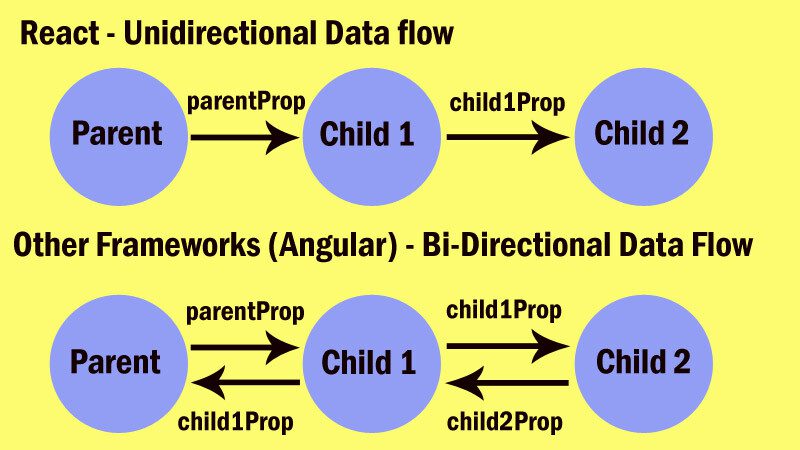 This is in contrast to other JavaScript frameworks like Angular, where data can flow back and forth.

This has its benefits, though:

All components can update their state. But what if we had a button inside a child component that needs to update its parent’s state? 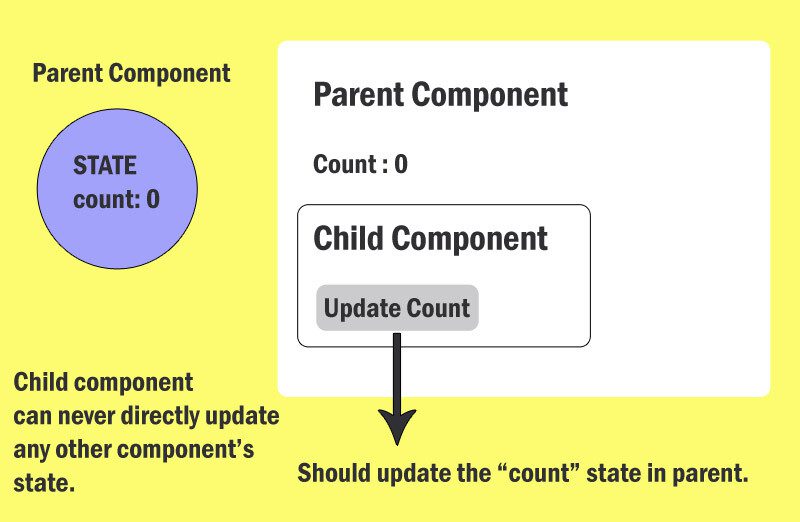 The solution is to give the power to the child component for updating the parent’s state. Here are the steps:

Therefore, using this technique, we can indirectly update a parent component’s state. 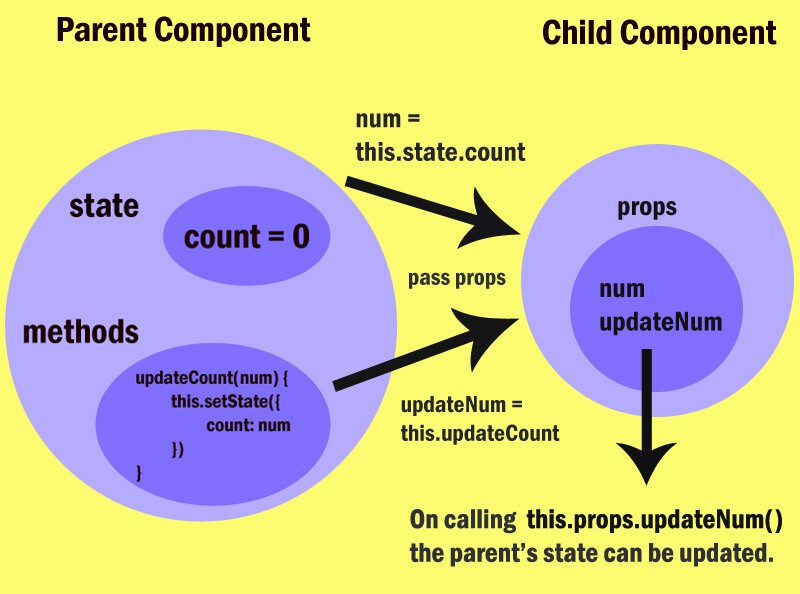 Let’s take the example below:

Now in the child component, the props will be available. We can add a button to update the parent’s “count” state every time a user clicks it.

When the button “Update Count” is clicked, it will update the parent’s state. In this way, we can update a parent component’s state by passing a state updater function as a prop.

State lifting is the action of moving the state upwards in the component tree to a common parent so that all the child components that require this state can access it.

The diagram below shows a “child 1” component that has a “count” state, but at some point later, “child 2” also decides to use it. They both have a common parent component. 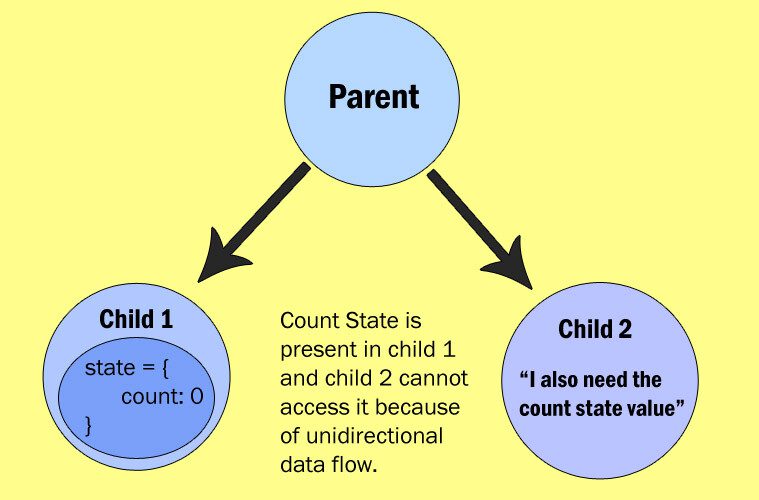 The solution is to move the “count” state to the nearest common ancestor. 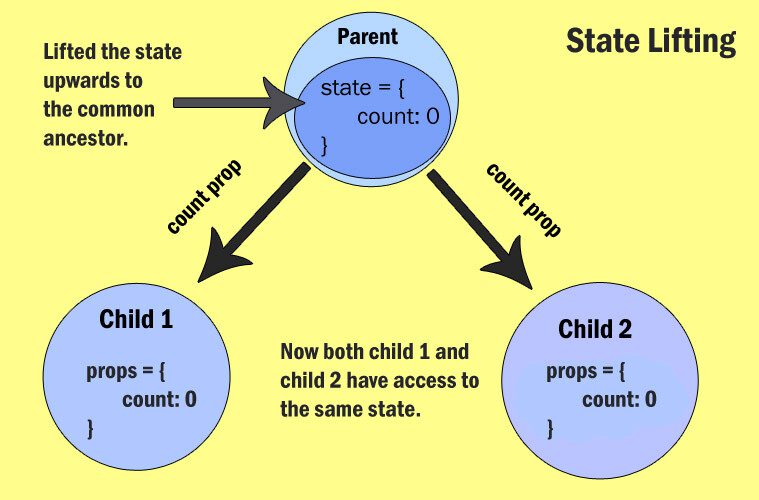 This is called Lifting State Up. Moving the state upwards in the component tree will ensure that all the child components need the state to receive it through props.

Do not move the state unnecessarily too high in the component tree. Always move the required state to the closest ancestor of the components that need it.

These use a similar type of component when rendering a list of data, which is an array. 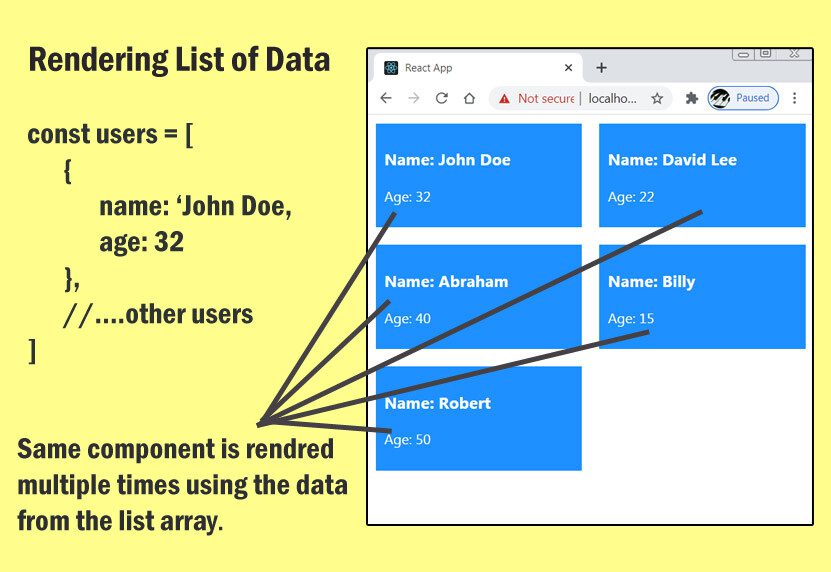 JavaScript has a higher-order function called .map() using which you can render multiple JSX elements/components. 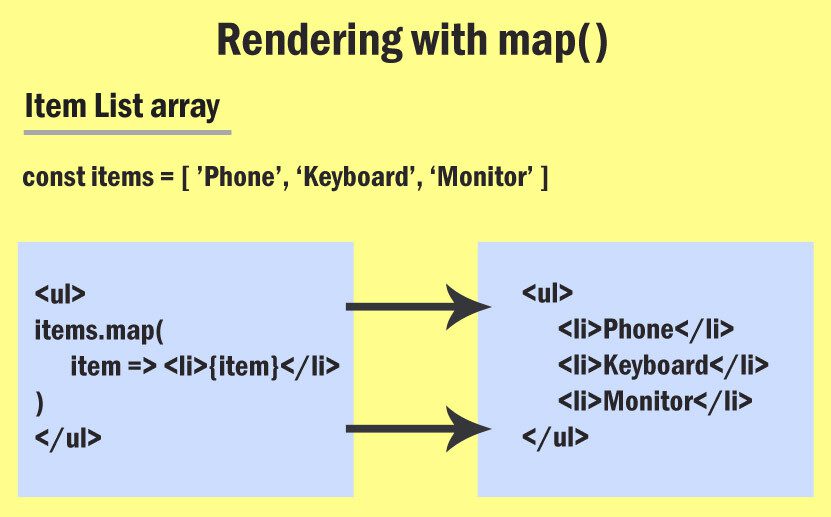 We can pass the array as a prop like below:

The .map() method takes a function that should return a JSX element or a component for each array element. The result of the above code will be displayed as a list of items:

We used the <li> tag for rendering lists. But you can replace that with components that can do much more than that. We can also render an array of arrays, an array of objects, and not just simple arrays.

We have to deal with forms in most web applications. How do you get the data from the form inputs once a user submits the form? It turns out that there are two solutions: controlled and uncontrolled components.

In controlled components, we sync the form input value with the state so that, whenever the form input is updated, the state will also change to update itself. This will allow us to use the latest value of the input from the state. 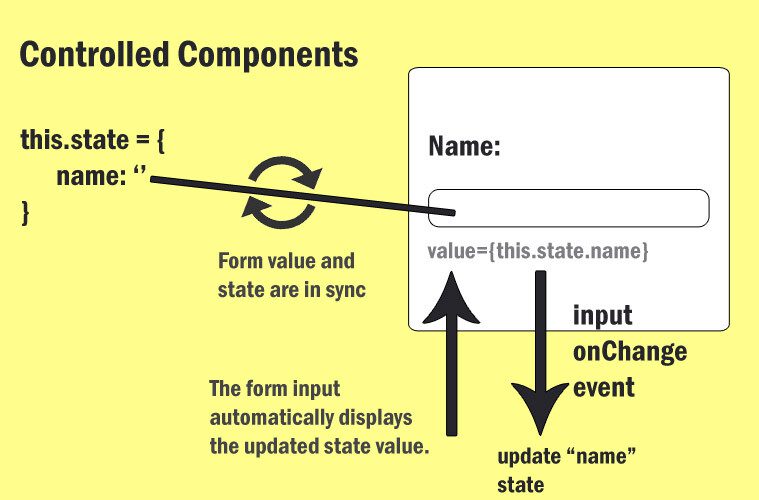 When the values are in sync, then the component is said to be controlled where:

To make forms controlled, we need to use the onChange event and the value attribute on the form input. The example below shows a controlled form of input.

This kind of component is a controlled component.

We can also use other methods like React Refs to get the value of the form on submit/some other event. It will then be an uncontrolled component.

Learning to manage and organize data, state, and props is a very important skill in React. You may learn the methods, but this skill can only be improved over time with practice.

It may be difficult to grasp all at once, but you will encounter them sooner and later in your React Developer career.