Today, with the development of modern technology, we can see so many applications are using face detection technologies to make their solutions optimal. Let us try to get started with this interesting technology through this article.

In this article, we will discuss how we can detect faces in a given image file using OpenCV open-source library.

What will you learn?

After going through this article, you will learn:

Prerequisites
Before continuing, make sure you have the following installed:

What is Cascade File?

Cascade file is XML, a file that contains OpenCV data used to detect objects. There are many cascade files to detect different things, such as faces, animals, fruits, vehicles, etc. Since we are going to detect faces, we need to download the cascade file for face detection.

First, create a folder named “FaceDetection”. Inside that folder, create a file and name it “Start.py”. Then Open your terminal/command prompt and navigate into the FaceDetection folder, then run the following commands, and results will be as shown:

Check Whether OpenCV is installed Successfully.

Before going to other steps, we need to check whether our installation process was successful or not. In your Start.py, insert the following code and run that file:

If there is no error, we can go to the next step. 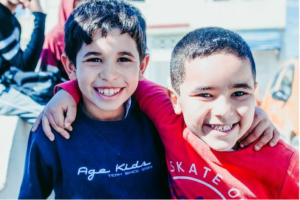 Download those files and store them in the FaceDetection folder.

Use OpenCV to Detect Faces

Add the following codes to Start.py

The Start.py will look like this after adding the codes above: 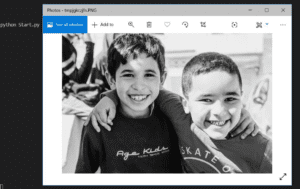 Now part 1 is completed. In that part, we imported cv2, configured the cascade file, loaded the image, converted the image to grayscale.

Now Let’s move to the next part.

Add the following codes to Start.py
The below code is used to detect faces from the given image. We should give some parameters for this task. To make it easy to understand, we use only two parameters for now.
Image: Image we need to use for face detection. (Note: We cannot directly put images to this parameter. We should follow the process in Part 1)

Scale factor: If we take a photo, we can see some faces near the camera, and some are far from the camera. We use this parameter to reduce the error which can occur due to this reason.

After running this code, it detects faces and creates a rectangle for each one. Those data for faces are stored as an array of arrays, which store data about rectangles. The data in the rectangle array stored according to the following structure:

Here you can see it detected two faces in our image successfully.

Start.py after adding those codes: 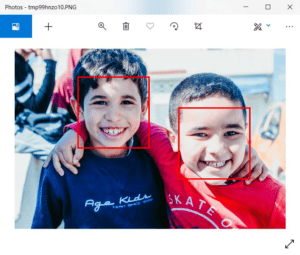 We can see that rectangles were successfully drawn around detected faces.

Step by step, we have reached the end of the article. In this article, we learned about OpenCV, cascade files, the installation of OpenCV for python, the usage of OpenCV to detect faces, and how to draw rectangles around the detected faces. I hope this was very useful for getting started with face detecting technology in the modern world.